The most common question we get from our students at AviatorPPG is “Which wing should I buy?” And why not? It’s a big investment when you purchase a glider because you want something that’s going to last several years and meet all of your flying needs. It’s no wonder we all want to know how to choose the right paramotor wing – it’s of the upmost importance. When making this decision we take into consideration safety, enjoyment, price, and so many other factors. Naturally, it shouldn’t be taken lightly.

One of the biggest concerns over purchasing a wing is the worry that as a new, but steadily improving pilot, a beginner wing just won’t cut it in the long run. People often wonder how soon they’ll be ready to advance to a more dynamic glider as their skills grow.

While the EN standard ratings place those “beginner” or “intermediate” pilot levels with A and B rated wings, don’t jump the gun. Both gliders offer benefits and diversities to flying which are unique to each classification. This means one may not simply be “better than the other.” Is there a natural progression of pilot skills that shift you into more dynamic wing categories if you so choose? Of course there is. However, with that being said, we encourage everyone to see that the pros and cons of the A and B rated gliders can be slightly more separated; they can be viewed as unique assets, as opposed to only comparing them to one another.

The EN system encompasses classifications of A, B, C, and D rated gliders, with A considered the safest, most docile of flyers and D being the most dynamic, fast, and least safe. Every new wing that enters the market is rigorously tested by highly skilled pilots. As new students begin training with Aviator Paramotor, we always start them off using A rated wings for safety purposes. Not only does it keep new flyers at a slower pace, but because of the A’s docile nature, it’s a great way of learning how to make small, smooth inputs of control, which we’ll discuss later.

In all honesty, now is probably the most fun, safe, and exciting time to learn how to fly! Paramotoring has come a long way, and while the sport continues to evolve, as it stands currently we’ve reached a peak of developmental ingenuity regarding glider technology. With the most up-to-date makes and models being married with the most scrutinized, highly-tested safety features, the wings on today’s market far outshine their dated counterparts.

So, how to choose the best paramotor wing should include an examination of both EN ratings and individual wing features, coupled with pilot skill levels, growth, and future flying goals. Whether you’re kiting on the ground, still in the beginning stages of learning, flying leisurely, or soaring skillfully, taking great consideration in the gliders you purchase is obviously crucial. With that being said, let’s dive in!

You can’t go wrong with an A rated wing – it’s the safest, least dynamic wing in the PPG world today. Considered the “Swiss Army Knife” of gliders, A rated wings have proven safety and stability time and time again.

In a basic definition, the qualification of an A rated glider means that in the event of a collapse, the wing must be able to re-inflate with zero pilot intervention within certain parameters set by the EN.

A rated wings also possess a wider “aspect ration” (the ratio of the projected wing span divided by the cord of the wing) than more expert-level gliders. Having that wider ratio causes for slower flight speeds, creating more drag, but on the downside makes for less efficient steering. However, the decreased speed, pressure, and steadier input rate make the likelihood of a collapse significantly lower.

So, why invest in an A rated wing? It’s that slower speed and built-in stability that’s exactly the draw. Who wouldn’t want a glider that’s designed to keep you safe, despite making a mistake or poor piloting decision? Making quick, big inputs with steering have the potential to create some seriously bad outcomes when flying, but with an A rated wing, those input errors are much easier forgiven.

Want to learn how to thermal? Maybe you want to get acquainted with handling more turbulent air? Tackle higher winds? All within reason, of course, but that A rated wing is your best friend when it comes to training for these conditions. Of course, on the whole, the A rated wing is a great way to solidify your piloting skills when you’re new to the sport of PPG before moving forward.

So, consider this: while the A rated wings may not progress with your developing skillsets, they do aid in you developing your overall abilities as a pilot, not to mention they’re great for leisurely flying. Instead of dismissing the idea of owning one, think about it this way – having at least one certifiably stable wing in your quiver will actually help you in the long run. Sometimes it’s good to have more than one glider in your collection, because it gives you more options and more say so in the types of flights you’d like to have. 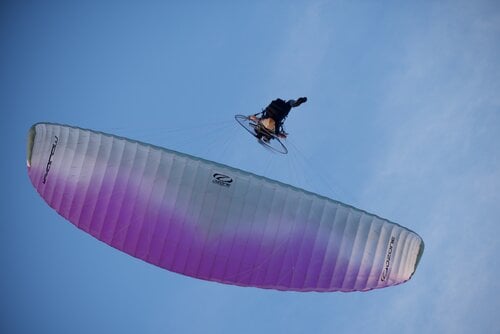 For Aviator, Ozone produces some of our favorite wings, but of course there are many amazing brands on the market today! In the A rated classification, our go-to is the Ozone Mojo Power. However, the information we’re sharing most certainly applies to all wings out there.

Once you’re ready, undoubtedly B rated wings are a nice step up from A class wings. Moving into this new category allows you to keep growing, and keep building up those expertise. Not only that, but B rated wings grow WITH you because of their added features. Offering faster flying speeds and more dynamic steering capabilities, it allows you to steadily become accustomed to the shift from A to B.

Ultimately, Bs are the same size as A rated wings, just with shifted aspect ratios – becoming slightly longer, and more elliptical in shape. With this alteration comes reduced amounts of drag, along with less effort being required to make steeper turns on top of that increased speed. 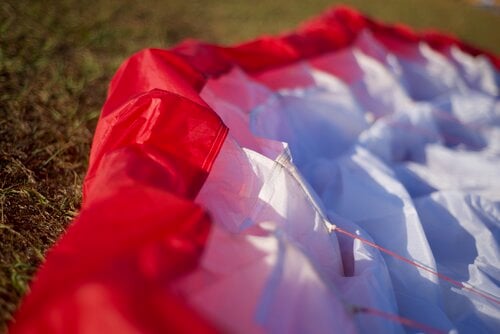 As a reflex wing, providing more options for altered aerodynamic direction also results in those increased speeds. Additionally, B wings come with tip steering for added dynamics, so once you’ve reached a level of comfort with your new B wing, adding in the use of tip steering will keep you on that steady stream of progression for an even longer time after the initial upgrade.

The downside it that it’s less safe than its A counterpart, taking collapses more easily and requiring some pilot intervention for re-inflation. The collapses are typically due to those added speed capabilities in conjunction with added pressures on the wing. Regardless, it only takes one mark on the EN scale to divert a wing from the A category and subsequently get it placed in B classification. Bs, while technically “intermediate” still offer a lot of safety.

Our recommendations on B rated wings are Ozone’s Roadster 3, and it’s lighter, although uncertified, sister the Spyder 3.

Just like the A wing, having that B rated glider in your arsenal is great not only for the purpose of advancing your expertise, but for that added diversity in flight. However, from A to B, ultimately the decision is yours – what type of pilot do you want to be? Which wing best suits your needs both immediately and in the long run? What are your preferences? What do you enjoy the most? These are legitimate questions you should be asking yourself as you do your research on wings. Maybe you’ll start with one right now, but don’t forget, there’s always room for that diversity as you continue your journey into paramotoring. The more arrows you have in your quiver just means you’ve given yourself the ability to grow further, and master the talents you’ve dedicatedly been cultivating thus far.